Family Weekend is a special time dedicated to Aggie parents and family members and gives students an opportunity to express their gratitude to those who have impacted their lives. While the event has held several different names over the past century – Mother’s Day, Open House and Parents’ Weekend to name a few – the sentiment it represents remains the same. 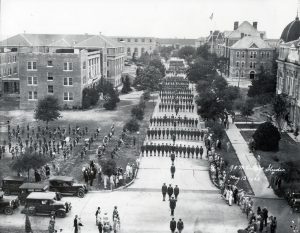 The tradition began in 1919 shortly after the end of World War I. Membership in the Corps of Cadets was mandatory, and mothers often found themselves worrying about the welfare of their sons. President Woodrow Wilson had recently issued an official proclamation establishing a national Mother’s Day holiday, and Family Weekend originated as a recognition of the holiday on campus. Corps flower pinning, military reviews, chapel services, campus tours and outfit award presentations have been staples of the weekend since early on. When the university moved graduation ceremonies to early May in 1971, Parents’ Weekend was moved to April as a result, where it has remained.

After 1965, when membership in the Corps became voluntary, new activities were continually added over the years to include a wider variety of students. Some of these new activities included the Bevo Burn Barbecue competition, Memorial Student Center (MSC) Variety Show, and Residential Housing Association (RHA) Casino.

While the Maroon and White football game is now a much anticipated Family Weekend event, the game first appeared on the schedule only as recently as 1982. This exhibition game began as a charity event in 1941 and, over the decades, involved intramural student athletes, former varsity players, including Heisman winner John David Crow, and current Aggie players and coaches.

Under the supervision of New Student & Family Programs, Family Weekend is planned and coordinated by the Aggie Family Ambassadors student organization. This special time is dedicated to Aggie parents and family, and gives Aggie students a chance to express their gratitude to those who have impacted their lives.

1956 – First Mother of the Year recognized